Will the awards be the ones predicted here? Later edit: obviously not. 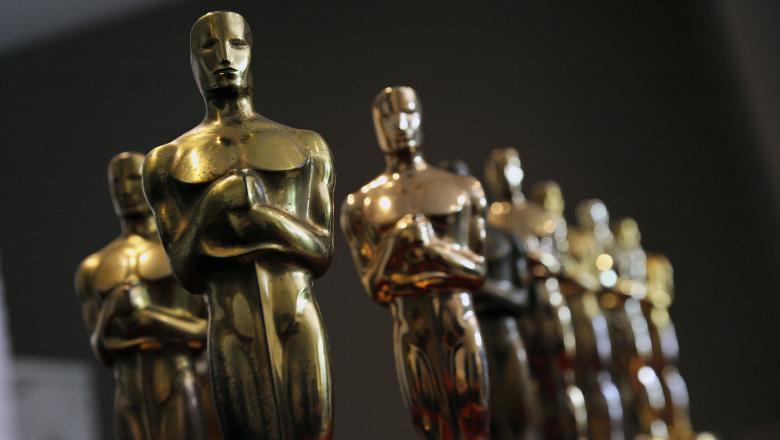 I am starting by watching the red carpet interviews. The winner is in red.

Chris Rock jokes to Martin Scorsese “I loved the first season from The Irishman”. “Cynthia Erivo hid all the black people behind her nominations”

Regina King presents the award for:

Brad Pitt is winning his 2nd Oscar (after 12 Years a Slave) first for acting. Appreciates Tarantino for originality. His character tries to look for the best in people, expect for the worst. He honors the stuntmen.

How to Train Your Dragon: The Hidden World – Dean DeBlois, Bonnie Arnold, and Brad Lewis

I Lost My Body – Jérémy Clapin and Marc du Pontavice

various actresses who dubbed the main character in various languages also sing parts of the song.

Once Upon a Time in Hollywood – Quentin Tarantino

Bong Joon-ho says they never write to represent their countries but they are glad for winning the first award for South Korea.

The Two Popes – Anthony McCarten based on his play The Pope

Marshall learned from his mother what is a good story that teaches us how to care about others.

Maya Rudolph and Kirsten Wiig present the award for

Once Upon a Time in Hollywood – Arianne Phillips

This is the 1st Oscar for Durran. Thanks to her family who allowed her to be a working mother. Also thanks to producer Amy Pascal and to the great inspiration, Greta Gerwig.

Julia Reichert is inspired by fellow documentarians and is honored to be in the company of other nominees. Their films are about people who unite.

Mahershala Ali talks about the importance of making the roles resonate with audiences, not only speak to them. He presents the award for

Lin-Manuel Miranda presents how film and songs have influenced each other and introduces Eminem who performs “Lose Yourself” – he was not present at the ceremony when his song won the Oscar.

Oscar Isaac and Salma Hayek presents the award for

Once Upon a Time in Hollywood – Wylie Stateman

Donald Sylvester says this is the last film by 20th century Fox. He says James Mangold should have been nominated for directing.

He thanks to her wife who gave up the editing career to raise the kids so they wouldn’t become politicians.

Once Upon a Time in Hollywood – Michael Minkler, Christian P. Minkler, and Mark Ulano

With this opportunity, Salma can say she at least held an Oscar on the stage.

Will Ferrell and Julia Louis-Dreyfus present the award for

Once Upon a Time in Hollywood – Robert Richardson

He thanks to the fellow nominees and for their friendship. He thanks his camera assistant who never makes a mistake, to operators, to his wife, to director Sam Mendes for a most wonderful experience.

Will Ferrell jokes that the original title was Ford vs Ferrari vs Ferrell and Julia was in 1917 and Parasite but were edited out.

Casting director and academy president David Rubin says another event is coming up: the opening a museum.

1917 is a challenge for visual effects

Ray Romano and Sandra Oh present the award for

Penelope Cruz talks about how she was inspired by Pedro Almodovar. Films show us more than what we see in our own lives and make us care.

Pain and Glory (Spain) in Spanish – Directed by Pedro Almodóvar

Bongs says he appreciates the change the new direction symbolizes by changing the category name and invites the members of the cast and crew to stand and be applauded. He thanks the cinematographer, production designer and all collaborators.

She is applauded with a standing ovation. She declares the score is a result of the communication between the composer and film director, therefore she thanks Todd Phillips.

Quentin Tarantino – Once Upon a Time in Hollywood

Steven Spielberg, a receiver of the Irwin Thalberg award, presents in memoriam (the list of cinema experts which passed away since the previous Acadamy Awards ceremony).

George McKay introduces Olivia Colman who presents the award for

Leonardo DiCaprio – Once Upon a Time in Hollywood as Rick Dalton

Phoenix is applauded with a standing ovation. It is important to voice the issues of those who cannot express themselves. The best of humanity is when we support each other for redemption. “Run to the rescue with love and peace will follow” River Phoenix. His speech is applauded.

Rami Malek presents the award for

Renee thanks her immigrant parents. “Our heroes unite us. When we look at our heroes, we agree.”

Once Upon a Time in Hollywood – David Heyman, Shannon McIntosh, and Quentin Tarantino