I long wanted to write about a charming city I have visited twice in 2010 and hope I will get the chance to further explore in the future. I wish I had not lost all the pictures I have made there to illustrate all these ideas. It’s amazing, and I don’t know where to start; maybe this is one of the reasons I have postponed it so much. I must say that these are my subjective impressions, and they might not reflect reality but only the perception of a tourist passing a few days.

As a Romanian, I was glad to find what I consider more respect for the culture. That is something I can see almost everywhere:

To me, Chişinău seemed more like a city frozen in time. It seemed as if I would have made a trip back in time to my childhood, and I say that in a very nostalgic way. 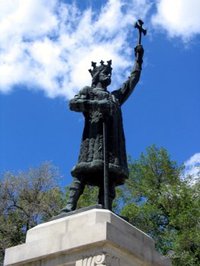 This perspective was perfectly integrated with modern technology:

From the marketing & PR perspective, it seemed to me something close to Disneyland; compared to Romania,

I was impressed with the pavement and roads (that is, in the city). I went with two couples to the Dniester, and I joked about a recently re-done road to one of my colleagues:

– How much do you think this road is gonna hold?

– Yes. Here, in Moldova, we don’t do roads like you, Romanians do. When we have money to build a road, we might as well do it properly because we know we won’t have any other money for this in 10 years.

Generally speaking, after you pass the customs office between Romania and Moldova, you know you’re in a different country because of the terrible roads. But those which are re-done are redone well. Otherwise, another great advantage was, in my opinion, the large roads from the center of the city, with a walking board in the center and the opposite lanes separate.

Also, public transportation is fast, cheap, and reliable. Even the taxi is cheap.

Generally, although poorer than Romania, the people from Chişinău seemed more cheerful, accepting, and empathic. In addition, they seemed more polite, independent, less talkative, and more inclined to enjoy the silence and listen.

Another place that I loved, and where I consider civilization is also prominent, is the Church. I refer to the Central Metropolitan Church, where I assisted at a mass. The church is in the middle of a park, which has a lot of benches, so that old people can listen to the group at the outside speakers. The church was well-aired. If you felt the need, you could take a breath outside and return, without disturbing anyone. The people were not crowded but maintained a respectful distance, leaving others to pray silently. All the icons were protected by glass. Photographing and filming were forbidden, and this rule was respected. Recently canonized saints were painted on the walls. I have seen no beggars.

I appreciated the parks. Although not comparable with the parks and gardens in Bucharest, which are excellently taken care of, I have liked the landscapes which can make you feel in the middle of nature, right in the city. There is less concrete and more grass in the parks than in Bucharest.

I know Chişinău can’t be compared to Luxembourg. Still, from the point of view of respecting the culture and mixing tradition and technology in a practical, discrete way, this is the city Chişinău reminds me of. And Brussels.

Romania, in the past 25 years, has regressed. Moldova, instead, froze in time. Economically, culturally and psychologically. But, always, stagnation is better than involution.

In the photo is the statue of Stephen the Great at the park’s entry in the center of the city.

One thought on “Chişinău”